Decarbonising home heating is both one of the thorniest, but also least discussed challenges in reaching net zero. According to the Energy Saving Trust, it makes up almost twice the average UK household CO2 emissions of our diet and agriculture. In total, home heating and cooking are responsible for about 15 per cent of total emissions.

Add to that the UK-specific situation – poorly insulated housing stock, fuel poverty affecting 2.5 million people on the rise, government subsidies that seem to change year to year. All in all, you’d be forgiven for giving up the ghost.

But as we’ve seen through the Covid pandemic, there is unexpected hope at a local level. And in the case of decarbonising home heating, also innovation and some progress – even in the absence of a clear nationwide plan.

There are currently hundreds of social enterprises across the UK focused on community energy, and think tank IPPR has even called for a ‘climate commons’ to accelerate this process even further. However, most deal with energy rather than heating. By Community Energy England’s own admission, heat projects are notoriously complex and require longer lead times.

If home heating is set to move away from fossil fuels, who’s first in line?

Both economically, and on the sliding scale of pollution, that would be the 4 million or 5 per cent of rural UK off the gas grid, still reliant on burning kerosene or LPG to stay warm and heat water.

Versus gas, renewable alternatives still can’t offer many savings. But oil produces more cost, as well as carbon. Pricing also fluctuates seasonally – rising in the winter up to 80 per cent (and twice that if you accidentally run out.)

Heat pumps – either via air source or ground – are widely considered to be the most viable alternative to oil. The air source version functions like an air conditioner in reverse, generating around three units of electricity to every unit cost to run. The ratio widens to 5:1 for ground source, though installing them involves greater cost and disruption. As the government’s own Future Homes Standard states, “heat pumps will become the primary heating technology for new homes.” 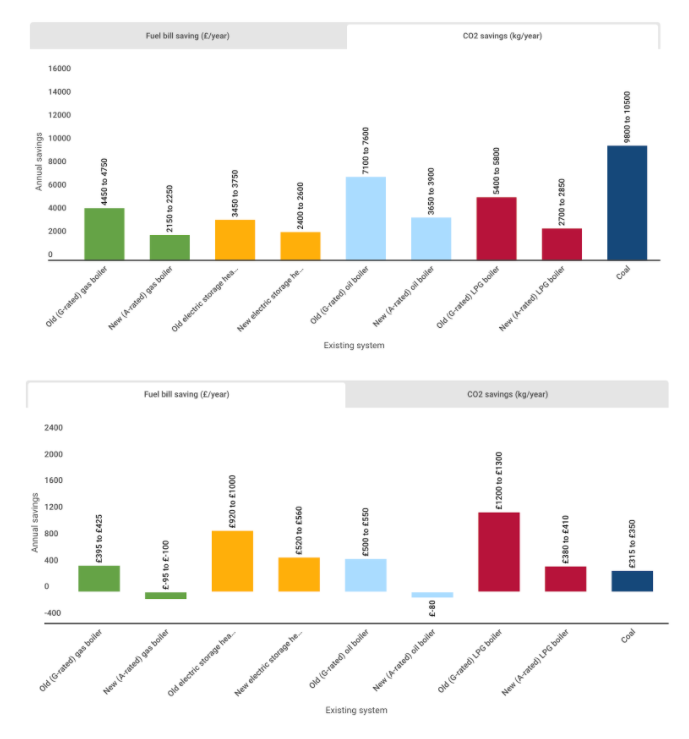 An early adopter, OHM Energy’s Jason Lindfield has been installing heat pumps in Sussex for 12 years already. he attributes his head start to a period spent living and working in Spain, where a monopolised power market spurred an earlier adoption of renewables than in the UK. Largely covering just one county, OHM installed around 300 heat pumps in 2020 alone. And over those 12 years, Lindfield says he has never had a customer reverse their decision to switch to renewable heat.

A Heat Network for Firle

Back in 2017, Brighton-based community energy group BHESCO began setting up plans for the East Sussex village of Firle to be at the cutting edge of decarbonised heating.

Even for those who were around at the time, It’s a challenge to remember fully when much of the UK was dug up to be attached to the gas grid. But decarbonising heat is potentially a project on a similar scale. Short term, the disruption is real, while the long-term impact either way is harder to picture so exactly.

The first underlying challenge the project faced was houses that didn’t retain heat. Much like the rest of the UK, the village would require retrofitting – i.e. glass, wall, roof and even floor insulation – only then could air or ground source heat pumps be viable.

A major barrier to retrofit remains an economic one. In the short (and sometimes also medium to long) term, outlay isn’t immediately made back in savings.

In response, some local groups such as BHESCO run share offers, raising funds upfront to offer financing in the switch to renewable heating. Overseeing installation, quality control and contractors, the group is paid back over time, from the balance of ongoing lower heating costs – the consumer still saves overall. 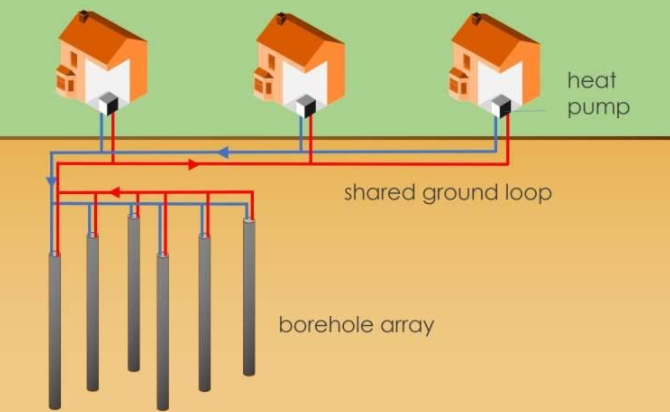 The village-wide solution for Firle goes beyond installing individual (and also the most common) air source heat pumps, that look much like air conditioning units. Instead, for multiple buildings it works out around 15% more efficient, and cheaper, for multiple houses to be linked to a heat network, connected underground to a ground source pump, which gathers heat from a deep, but narrow borehole.

Infrastructure – the Biggest Barrier to Decarbonisation

The government’s stated goal is to increase annual heat pump installations to 600,000 by 2028 is ambitious. Especially as the present rate sits at about 5 per cent of that.

In order to scale, it would seem many more villages like Firle will need to make the same switch, en masse – and many more similar projects will be needed. BHESCO’s CEO Kayla Ente points out that grid capacity remains a big question mark over the wider process.

It’s a challenge which will likely require community as well as huge government investment. And it’s also one, she points out, which was left unmentioned in the government’s recent ‘10 point plan for a green industrial future’. What there is however, is much emphasis on hydrogen – “Simply a way for the companies in control of the gas grid to keep that control – there is no clear affordable transition.”

To decarbonise heat, government, community groups and individual installers each have distinct, but crucial parts to play. And that’s just for the 5 per cent still on oil.

Meanwhile, 50 per cent of gas boiler households reportedly don’t even realise their heating contributes to global warming. In spite of this, OHM Energy’s Lindfield reports his firm is actually beginning to get some enquiries about switching from gas to heat pumps. And though the failures of the government’s Green Homes Grant (RIP) are widely documented, the scheme temporarily took OHM’s own weekly heat pump installation enquiries from ten per week, to up to a hundred.

As Ente points out, we are all ultimately motivated by economics – bear that in mind, and the shift to renewable heating is still possible – as is already the case for some of us on oil.

Photo by Simon Sikorski from Pexels