E-scooter sales continue to boom in the UK with the market flooded by both local and big name international brands. Yet the rise of e-scooter use on pavements and roads hasn’t impressed police in the midlands.

Leicestershire police has become the latest force to alert owners of e-scooters that if they are caught riding them in public they could be confiscated.

The force put out a tweet showing that they had already seized a scooter (pictured below) after the owner was found riding it on the pavement. They are following the lead of similar pronouncements from constabularies in Nottinghamshire (which has also been seizing e-scooters) and Derbyshire. 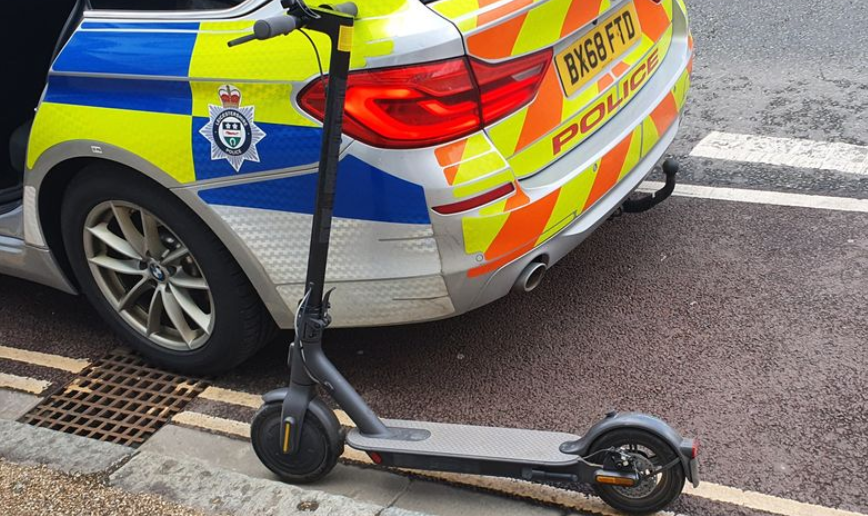 There is also a section of the London Met police that have voiced their concerns about private e-scooter use with Ch Supt Ovens telling the BBC anyone given an e-scooter should think about taking it “back to the manufacturer or shop”.

Those caught could face a £300 fine, points on their driving licence or have the device seized.

In spite of their widespread use over 350 e-scooters have been seized by the Met.

There are no accurate figures for privately owned e-scooters in the UK, yet Halfords reported a 450 percent boom in sales of them in November.

During the lockdown with quieter roads, the police appeared to be turning a blind eye to e-scooters users who, in theory at least, may be using them to avoid public transport thereby reducing their exposure to the virus.

As the UK prepares to return to some semblance of normality the unspoken truce between the police and e-scooters owners could be over.

The UK government is under a lot of pressure from environmentalists and industry groups to turn its e-scooter trials into legislation allowing their use. Halfords recently unveiled a petition pushing the government into speeding up the regulation process.

For now though many industry experts believe that the UK should look to Paris for inspiration.

“Paris is the best example we can all learn from. As e-scooters are legal to use in France, Paris was inundated with many different operators with different standards and reasons for being there. The city has been keeping a close eye on the development of e-scooters and introduced strict operational codes and limited the number of vendors to three. This regulation will benefit consumers in terms of availability and safety — as well as non-users by putting the emphasis on operators to minimise street clutter.”

Pyer also believes that e-scooters have a very important role to play in the development of smart cities.

“E-scooters will play a key role in smart cities of the future as a safe, green and socially distanced way of getting from A to B. Spin is working with Vivacity, using its roadside sensors which employ machine learning algorithms to detect near-miss incidents and are able to analyse movement patterns of vulnerable road-users such as cyclists and pedestrians, as well as non-connected vehicles. This data will be invaluable to assess why near-misses may happen and what could be possibly done to minimise them. Additionally, remotely operated e-scooters like the Spin S-200, will soon be available to the benefit of both riders and communities — enabling e-scooter hailing and the fixing of improper parking remotely.”

Photo by Hana Mara from Pexels