The ongoing rush to harness the power of wind to create clean sustainable energy systems has been well documented, although some sources say it isn’t happening fast enough.

But are there other potential uses of wind turbines? How about using a towed wind turbine to power a large boat? The possibility that this will happen one day soon is outlined in an intriguing article by research Harry Valentine.

In the article Valentime explains that Windmill-powered vessels are not new and have been around for some 40 years.  But he believes we might be reaching a tipping point.

“Research needs to explore the possibility of developing a floating technology capable of carrying a mega-size wind turbine that can be towed across the ocean by a large vessel while providing propulsive energy to such a vessel. In integrated/articulated tug-barge technology involves a tug unit pushing and navigation a barge,” he argues

Valentine says that the main application of towed floating wind turbines would be to provide energy when sailing into headwinds with sails providing a measure of propulsion when sailing parallel to the trade winds.

The article which as you expect gets pretty technical and goes into lots of detail highlights that the key issues that need to be overcome are drag and stability. 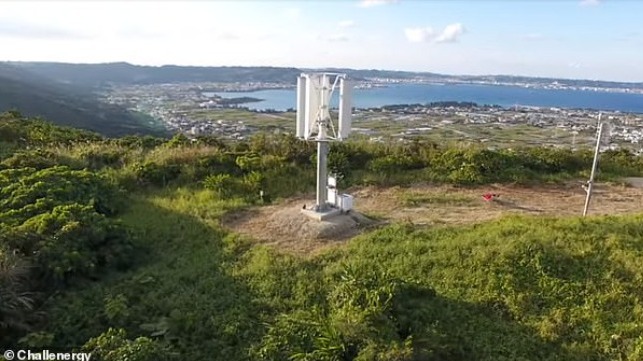 He cites the work of CHALLENERGY from Japan who recently unveiled a wind turbine that could withstand the rigours of a typhoon and continue to generate electricity.

Valentine concludes “Future research will need to develop methods by which to add low-drag mobility to floating wind turbines in a way that assists ship propulsion. While several of the GE horizontal-axis are possible contenders for future ship propulsion using the towed floating turbine method, there are ongoing developments in vertical-axis turbine technology that are overcoming the shortcomings of earlier generation vertical-axis units. Ships propelled by such technology could likely see service on trans-Pacific routes and trans-Atlantic routes.”