In just 88 minutes, the Sun produces enough energy to meet the whole planet’s energy needs for a year. Oxford PV might not have the solution to the climate crisis, but companies like it at least take us one small step closer to that potential.

The secret to future solar capacity, it turns out, is not just the sheer number of installations – it’s also in the raw materials. Since the first cell was born in the 1950s, that material was, and largely still is silicon. Though it has come on in leaps and bounds, Oxford PV’s CTO Chris Case tells me, silicon panels will only ever be able to convert about 25% of the sun’s rays to electricity.

This is where the PV in Oxford PV’s name comes in: Perovskite, a mineral first discovered in 1839. More specifically, a perovskite layer added on top of traditional silicon-based cells. And this tandem cell taking us to more than 29.52% efficiency, with a roadmap to achieve at least 33% efficiency in the short-to-medium term, and potentially 39% in the longer term.

That increase means cheaper energy. Which in turn effectively equates to lower cost – and it is only such economic drivers, as we’ve seen in the past few years, that will truly drive the transition to renewables.

The company is in the process of completing its production facility in Germany, on a converted site originally owned by electricals giant Bosch. After fundraising, and weathering some delays due to Covid, it’s aiming to be in production in 2022, 100 megawatts’ worth of solar cells per year, in a market predicted to be 150 gigawatts-sized in 2021, with the aim then to scale rapidly – “Solar has a 25 year lifecycle, so it’s not a short-term sales process – though initially we will be marketing to those who can most benefit from the 20% efficiency gains, such as homeowners with smaller roof spaces – this is by no means a niche product.”

If we are to hit net zero, efficiency gains like those perovskite offers could well have a role to play. Especially as older cells reach the end of their operational lives, and need replacing anyway. But how did a company which is clearly a UK born technology end up being built in Germany? As the name suggests, Oxford PV was pun out of the university there, and specifically from the work of Professor Henry Snaith, a Royal Society Fellow.

Says Case, “When we made the decision to build a pilot line, it wasn’t a simple one. We looked at around 100 different sites, but we struggled to find a suitable location in the UK, or sufficient engineering talent. It’s clear all countries need to now have an interest in energy security, and there’s no reason why this can’t also be done in the UK.

“From a manufacturing point of view, in terms of weight, it’s clearly illogical to import and export glass. Especially as in the UK, you have a pioneer of that industry like Pilkington in your backyard – so why not combine both here?

“But we really need more support from the government here. Though ultimately, the UK doesn’t have that many impediments – and I don’t mean subsidies, just make it easy to buy and install solar, not just ours, anyone else’s for that matter. Three or four years ago, the UK was a European leader in the installation of solar panels – and there’s no reason why it can’t be again.”

In the week we speak, it emerged that 95% of a £1.5bn grant scheme set aside by the government for “green homes” was left unspent. Moreover, none of that was being carried over into 2022, plus only a fifth of that total currently budgeted for the next year. With this in mind, I ask Case from where he thinks the major impetus for reaching net zero might ultimately come – if not from political leaders, then what role for business? What about local co-ops or community energy groups? 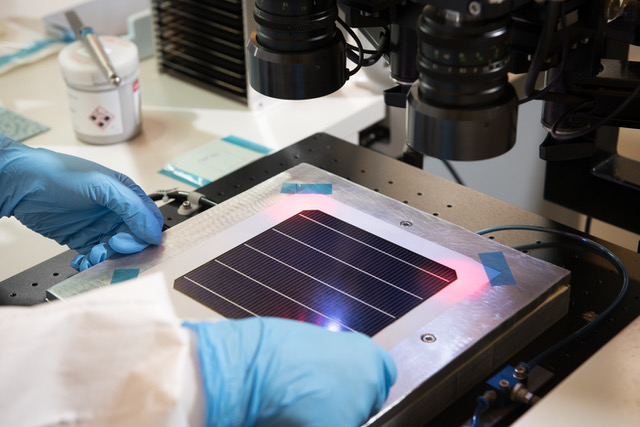 Responding, Case cites two of Oxford PV’s investors – Norwegian oil company Equinor, and Legal & General, best known for insurance, but with £1tn in management: “Their vision is to help provide housing that meets sustainable requirements – that they help to drive this vision is critical.”

Naturally, Oxford PV isn’t the only company working with perovskite in solar. Others talk about more outlandish use cases – the potential for printing cells at home via inkjet printer, or placed on the sides of buildings as genuine opportunities for the future. Oxford PV began life trying to invent a new category of window, that would itself generate power.

Case says that all of the above is possible, and in fact is already being accomplished: “We would love to see all of those ideas fully explored. But in the meantime, perovskite is low cost, and easy to produce – and has the potential to really move the needle, on a global level.

Photo by SUNIL PATEL from Pexels