The latest big food brand to announce its intention to target the burgeoning vegan/plant food market is PepsiCo. The US company, which not only owns the fizzy drink brand, but also includes Cheetos, Doritos and lots of other big food names, has announced a deal with Beyond Meat to manufacture snacks and beverages made with plant-based protein.

Beyond Meat, which IPOed in 2019, is arguably the global poster child of plant-based food. It has become a favourite of the financial community and at one point  Its market value reached a whopping USD 11.7 billion.

Speaking of the deal, Beyond’s founder and CEO Ethan Brown tweeted  “We look forward to together unlocking new categories and product lines that will inspire positive choices for both people and planet.” 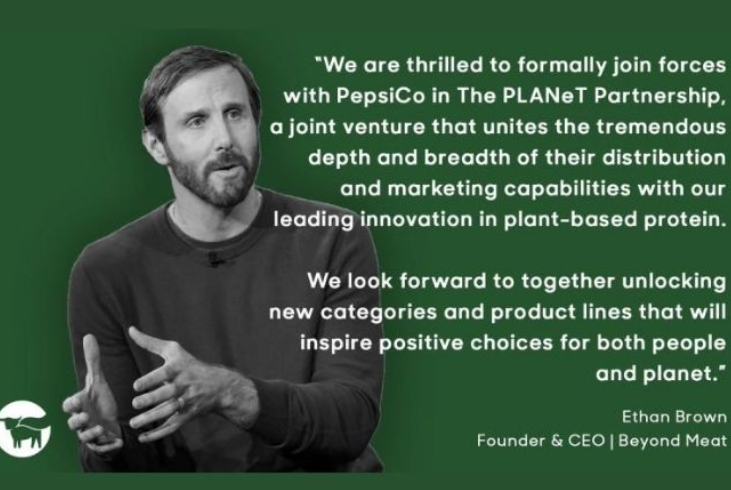 At first glance, this seems like a big win for both parties. PepsiCo has been slow to embrace plant-based food products and its deal with Beyond will enable it to not only ramp up production but achieve this with a partner seen as one of the hottest in the plant food world. Initially, the deal is for the US only, but PepsiCo has suggested that the two big markets it will address soon after are the UK and China.

For Beyond it will at some point be able to access PepsiCo’s markets in over 200 countries. It will also give an opportunity for Beyond Meat to explore more plant-based meat alternatives and develop an array of products that can be delivered to a huge potential market. Beyond Meat (BYND) stock shot up with shares up about 18%.

Not everyone is happy with the deal though. In some ways it encapsulates the dilemma that keeps some ethical vegans awake at night.

On the one hand ethical vegans want a world in which animal cruelty is gone and that everyone adopts a plant-based diet. However, the fastest route to this at the current time is via big corporations. Yet these are the type of companies which they perceive to have unethical practices and in the past, and in many cases at the current time, are responsible for the slaughter of billions of animals. It is a deal with the devil.

Some ethical vegans have issues with Beyond as they allegedly test their products alongside real meat products.

Another company that has recently got the ire of ethical vegans is Oatly. The company secured a $200m investment with Blackstone. The company, which is one of the largest private equity firms in the world, not only has a founder Stephen Schwarzman, who apparently funded part of Trump’s re-election campaign but also backs the Brazilian company, Hidrovias, which was accused of being actively pushing deforestation of the Amazon. Admittedly Blackstone has denied Hidrovia’s involvement in this, but it’s a charge that is starting to stick in vegan circles.

And then there’s the issue of markets that are opening up to both cow’s milk and animal food like China. If you want to make a real impact why not address the world’s largest potential market for your product. Yet as Oatly discovered when the Chinese state-owned investment firm China Resources bought a 30% stake in the company in 2016 there will be lots of people lining up to highlight China’s poor environmental and human rights records.

For Beyond there is the question of what would happen if they do not partner with a huge food company. It is likely that other companies will take their place, which is then a problem for not just the company but its shareholders too.

It may be that at some point in the future we see a divergence between what we understand as the plant-based food movement, which could become the preserve of flexitarians, and a more militant ethics-based vegan tribe which at its heart doesn’t want to engage with larger companies. This would be hugely counter-intuitive as much of the momentum of the plant-based movement has come from long-term ethically-driven vegans.

For now though the deal between Pepsi and Beyond could ultimately speed up the day that mass farming of animals comes to an end, and that surely has to be a good thing.

featured
Share. Twitter Facebook Pinterest LinkedIn Tumblr Email
Previous ArticleFord’s smart scooters, that you can hail like a taxi, to launch in the US in the spring, Europe soon
Next Article The airport of the future? Air One in Coventry is designed for flying cars and drones and will be carbon-neutral