One of the key trends in recent years among GenZers and younger Millenials has been ‘wardrobe rotation.’ In a bid to be more sustainable in their shopping, environmentally-concerned consumers have shunned buying new clothes but rather investigated used fashion items via online marketplaces and apps, often wearing them only a few times before selling them on.

Major companies in the space include DePop, as well as Poshmark which recently IPO-ed.

The problem for younger consumers is that the process of selling the clothes can be difficult and time-consuming. On some platforms it is more than just having to list, sell, package, and ship their items it might also include becoming involved in the community too.

Curtsy, a clothing resale app and website which is based in San Francisco, hopes to address this. It has announced it has raised $11 million in Series A funding, to extend its reach and improve its technology . The startup has pivoted somewhat as it evolved out of an earlier effort for renting dresses. It is now fashion-focused enabling younger women to seamlessly sell their clothes, shoes and accessories.

“The big gap in the market is really for casual sellers — people who are not interested in selling professionally,” Curtsy CEO David Oates told TechCrunch. “In pretty much every other app that you’ve heard about, pro sellers really crowd out everyday women. Part of that is the friction of the whole process,” he says.

Curtsy is addressing the needs of casual sellers by streamlining the processes.

When it comes to listing items, Curtsy harnesses both machine learning and human review to help vendors optimise their chances of a sale. The app not only recommends a price but automatically fills in details like the brand, category, subcategory and shipping weight. The app also optimises the images and moderates listings for spam.

The company archives the listings too so that consumers can relist their items with one tap. 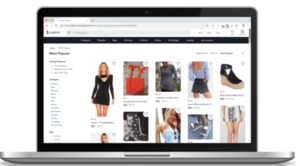 Another key issue that Curtsy addresses is the perennial printer problem. Acknowledging that many Gen Zers don’t have access to a printer it has created a free starter kit with Curtsy-branded supplies for packaging their items at home, like poly mailers in multiple sizes.  The company also helps sellers to schedule a free USPS pickup and will even send vendors shipping labels.

The Curtsy app is iPhone only at the moment, though an Android version is due imminently.

The investment round was led by Index Ventures, and included participation from Y Combinator, prior investors FJ Labs and 1984 Ventures, and angel investor Josh Breinlinger (who left Jackson Square Ventures to start his own fund).

featured
Share. Twitter Facebook Pinterest LinkedIn Tumblr Email
Previous ArticleNHS uses blockchain technology to monitor vaccines
Next Article Research finds that younger Americans are turning their back on meat with more than half identifying as flexitarians